Kyle has been asking for a while now to have his room updated from the pirate wallpaper and peanut brown paint he has had since he was a toddler. Yesterday and today I took off work so Katra and I could make his wish come true. We bought all the supplies yesterday then, as soon as he left for school this morning, began the redesign. It took a bit longer than we thought – so much for finishing before he got home from school – but the results are so worth it. 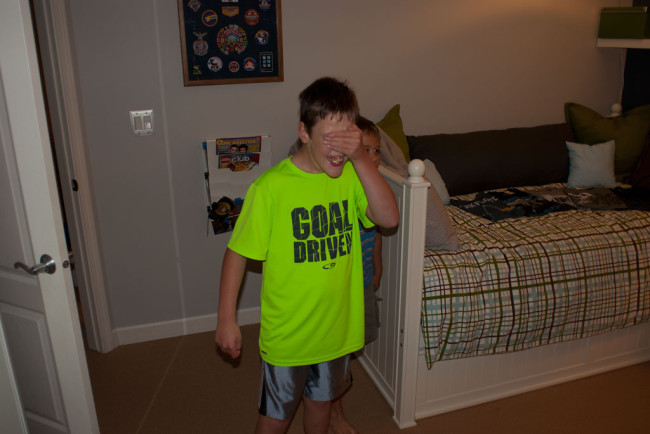 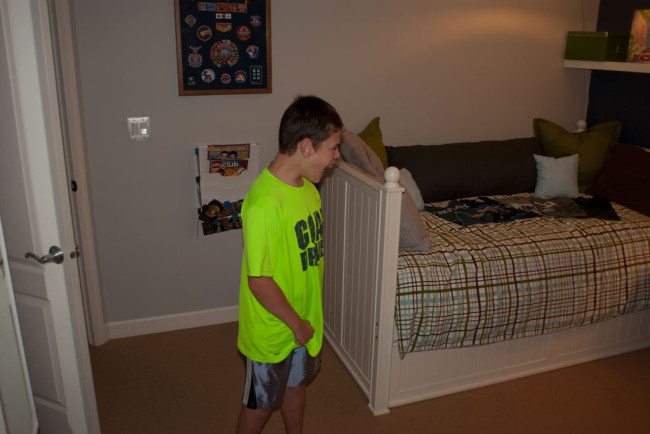 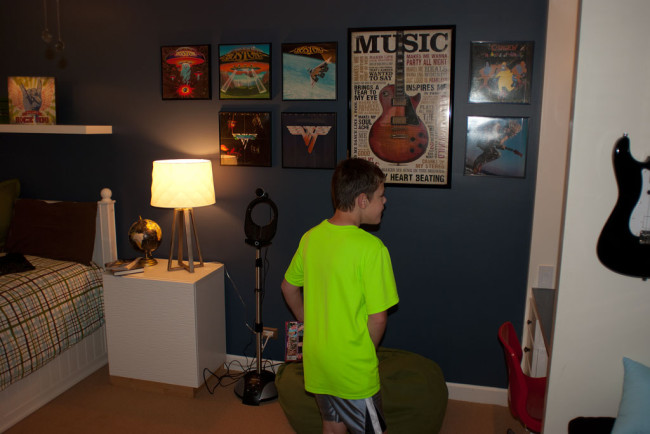 Checking out his new posters. I put some of my old LPs into frames and hung them on the wall. 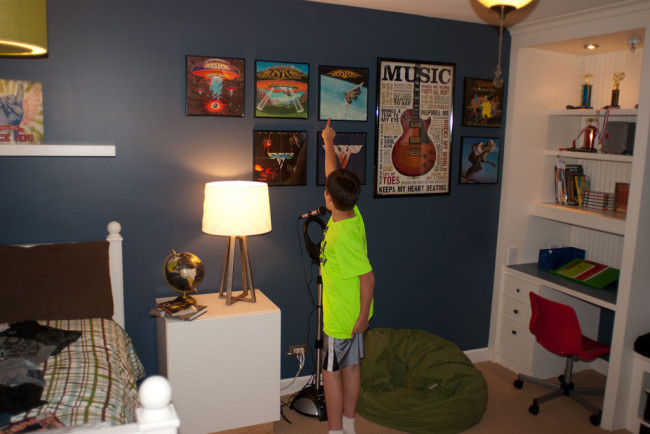 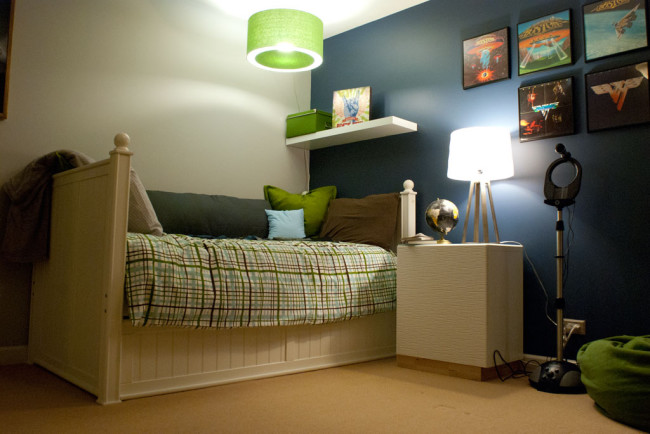 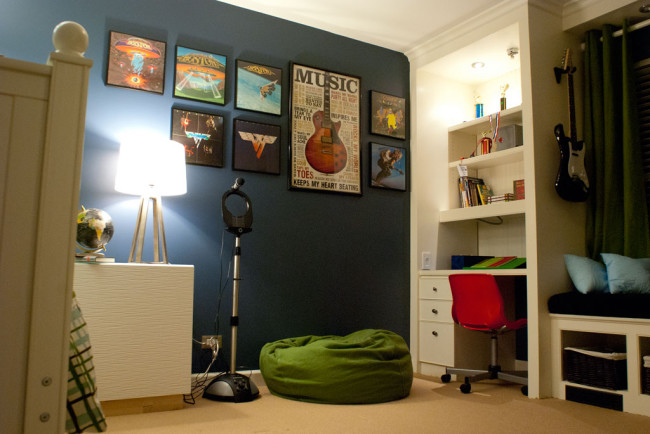 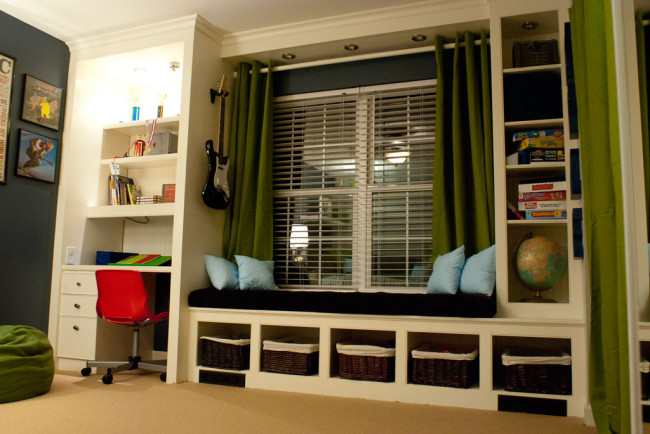 Ian has been really interested in board games lately, so for Christmas I decided to make him a chess board. I bought the chess pieces off of amazon, then designed a board to fit them. 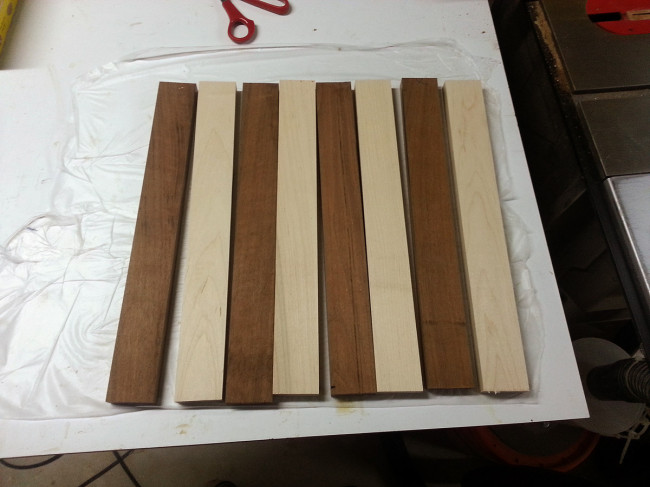 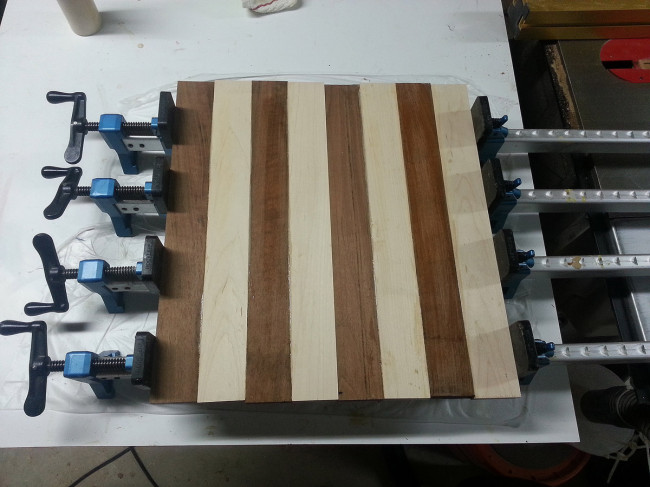 The strips glued and clamped 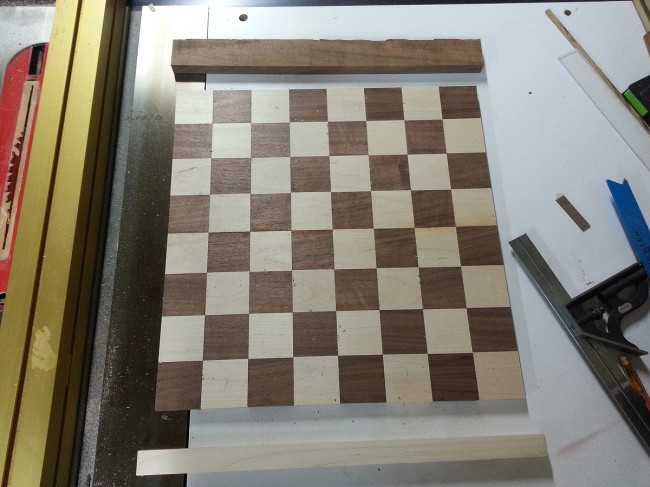 The board of strips was then crosscut into 2″ widths. The resulting checkered strips were alternated to make the chessboard squares. 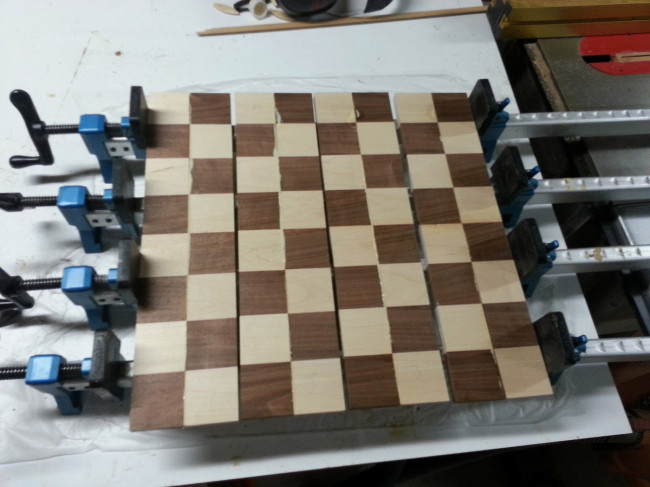 Because of the complexity of this glueup, I did it in three stages. In the first stage I biscuited and glued the strips in pairs. I then glued the pairs together to make to halves, then glued the halves together. 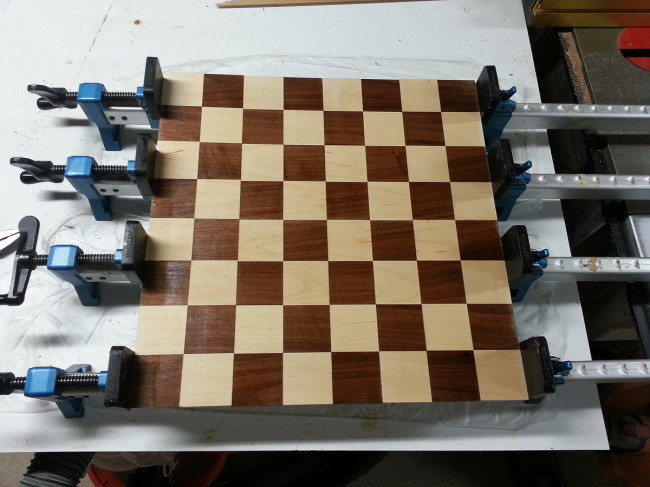 The final assembly glued and clamped. 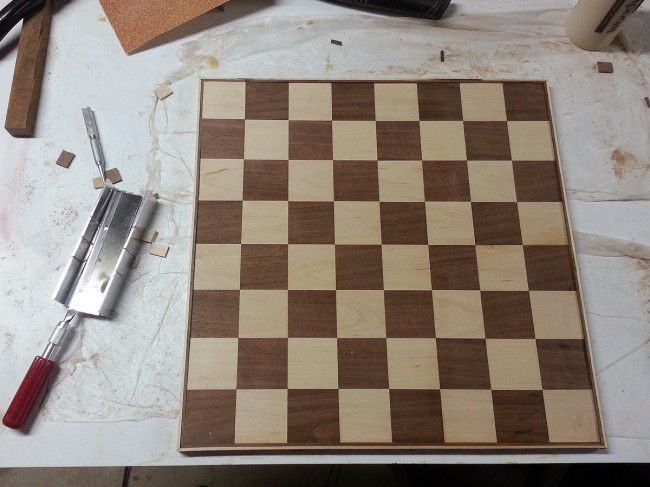 1/8″ edge banding in maple and walnut 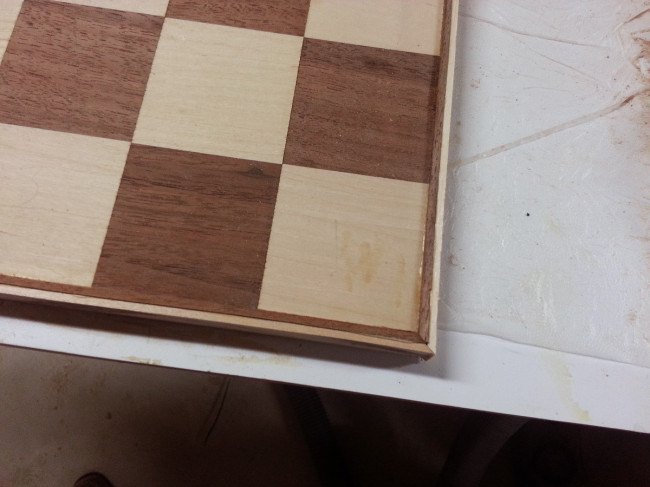 Detail of the edge banding 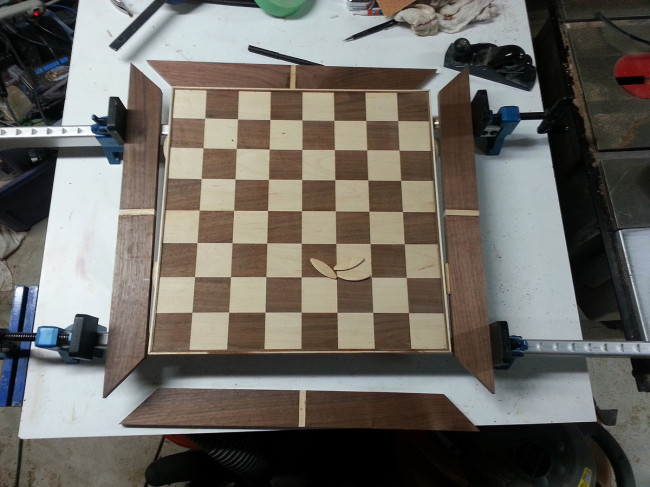 The edges were originally going to be solid walnut. While cutting the miters for the corners, however, I made a bad cut so the corners weren’t going to match up. Rather than plane and saw more walnut, I just cut each edge in half and inserted a 1/2″ strip of maple as a detail. The end result looks very nice and you would never guess it was the result of a mistake. 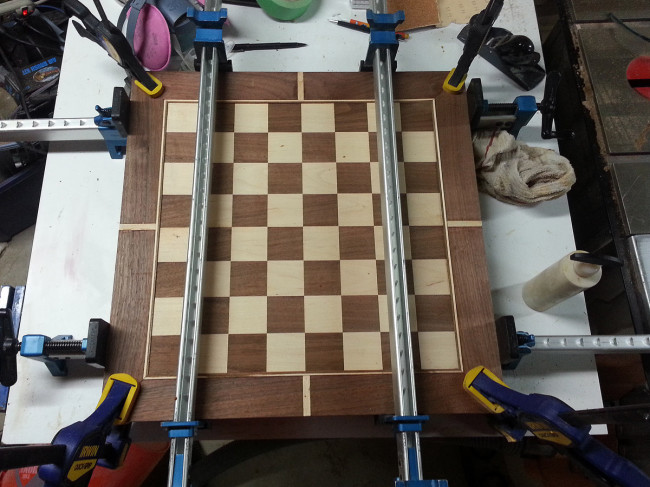 Edges biscuited and glued on. You can never have too many clamps. 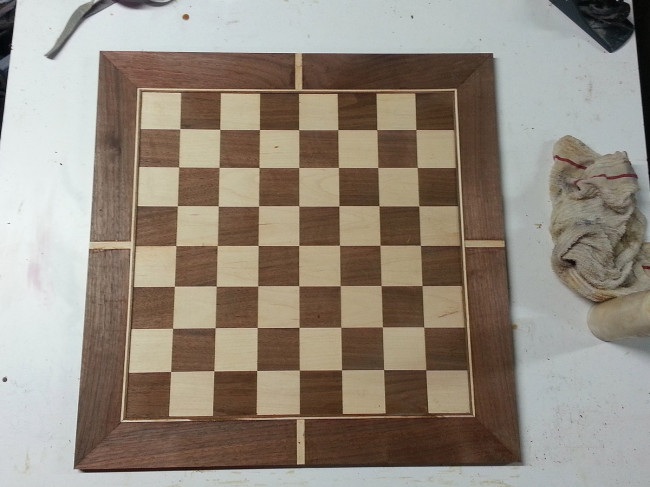 Final result before beveling the edges and sanding 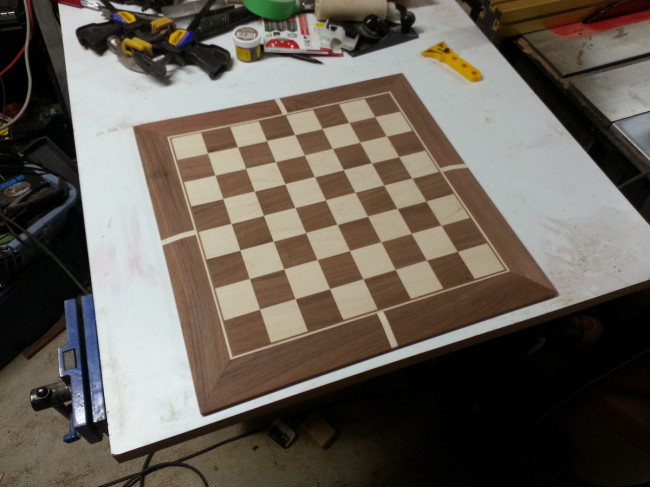 Edges beveled on the table saw and sanded to 220 grit.

Sprayed down for wet sanding. My favorite part of any woodworking project is to see the color of the wood come alive like this. 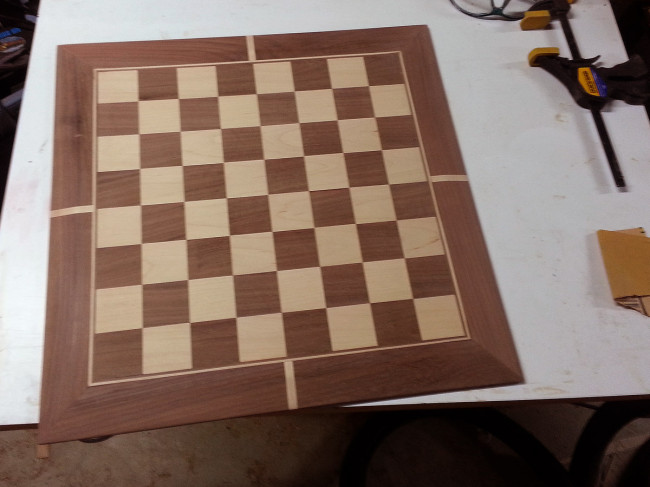 Wet sanded to 320 grit and ready for finish. 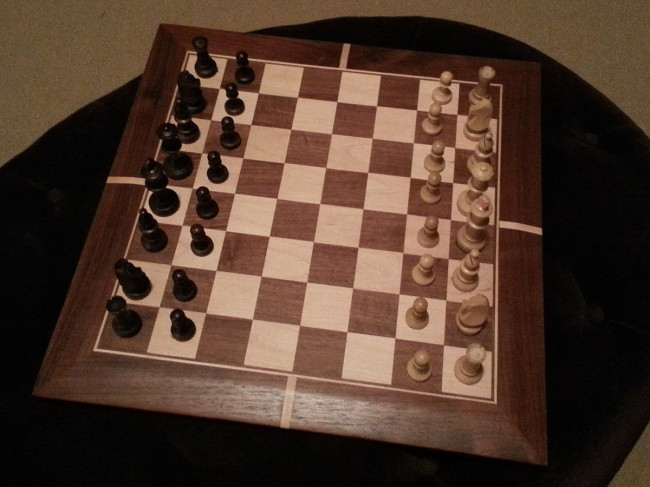 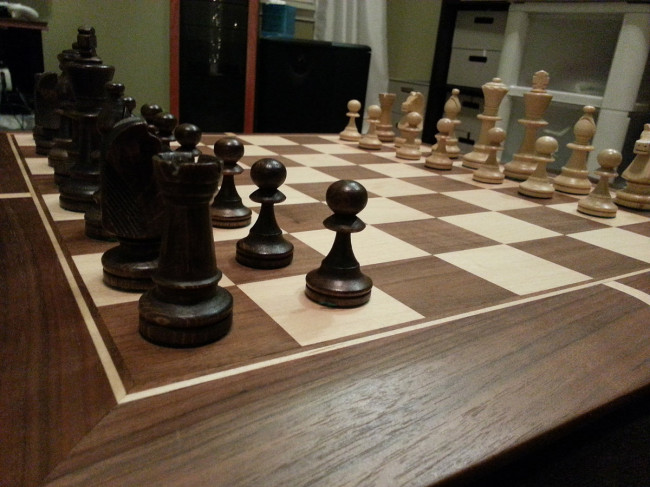 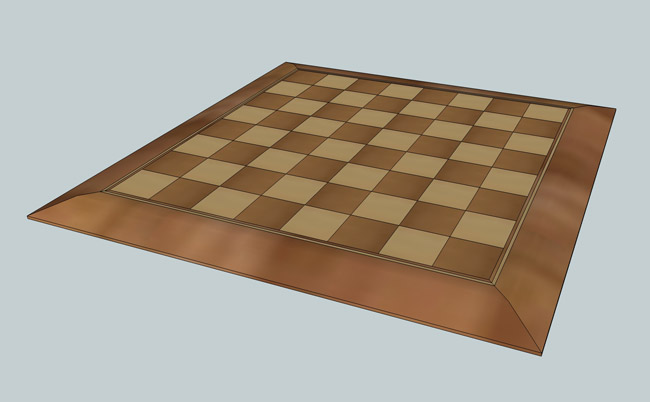 The SketchUp design for the board.

Our 11 year old Sony TV died recently,  so we were reluctantly forced to upgrade to a fancy new LED TV. The new TV doesn’t fit in our entertainment center,  and for a while we were uncertain what to do with it. We paid too much to just put it on the curb,  but we would never get anything for selling it.

Then Katra had the brilliant idea (inspired by Pintrest) to convert it into a breakfast station.  We would be able to keep the entertainment center,  which conveniently fits in a corner of our kitchen,  while also clearing up the counter space currently occupied by the microwave,  toaster,  and coffee maker. 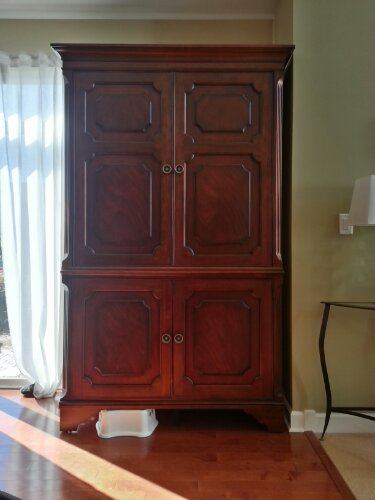 This unit came with a removable shelf at the bottom of the tv cavity. I suspended the shelf on threaded rod wrapped in aluminum tubes which I painted with clear lacquer. 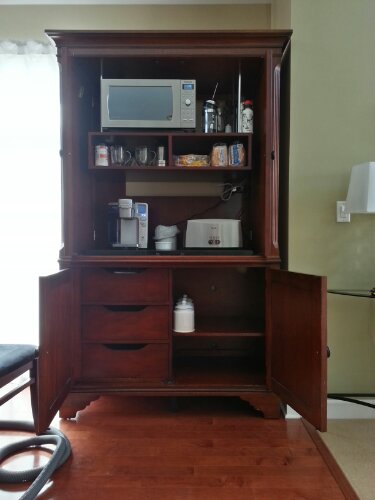 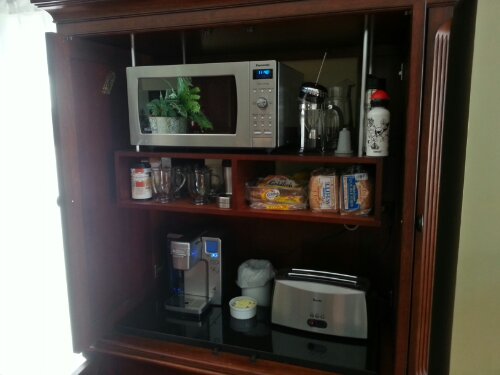 Everything fits perfectly,  and we were even able to use some old granite countertop pieces that had been collecting dust in the garage for the past 8 years.

Our new Pinewood Derby cars are finally complete, after about 1-1/2 months of work. I did the rough shaping and painting, but Kyle and Ian both picked out their designs, sanded their cars, put on stickers, and hammered on the wheels. They look pretty nice, now we just have to wait until February to see if they drive nice.

I completed installing the railings today. I still have to stain the columns and touch up the stain on the railings: 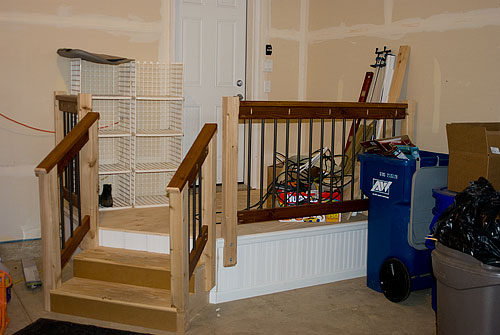 Also left to complete is the floor tiles on the deck and the paint on the skirt around the deck, but both of these have to wait for warmer weather.