Sighted at the local McDonalds. 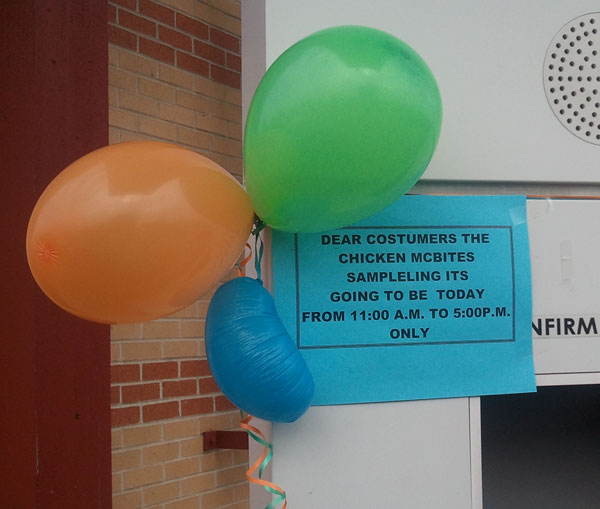 Proof that the McDonalds employment application doesn't include a spelling test

If you are sitting in your car in a parking lot with your husband and kids, singing, “If you’re happy and you know it” to your son, and you see someone in the parking lot who has the hairstyle commonly referred to as The Mullet:

Do NOT make the next verse of the song, “If you’re happy and you know it, say ‘YOU’VE GOT A CRAZY MULLET!’”.

If you do this the Mullet Person will undoubtedly hear you and turn his head your way, then stare at your car for, oh, a good solid 20 seconds before you’re able to pull out of the parking lot. It turns out the Mullet Person has especially good hearing skills, by virtue of the short hair on the side of their head.

It may not be what you expect.

Click here to read more about this insidious enemy of peace. It may well save your life.

Wendy’s is serving breakfast now. I’ll try almost anything once, so this morning we decided to give it a taste.

Keep in mind that this has been in the planning stages since way back when Katra worked at Wendy’s Corporate (7 or 8 years ago). In all that time they must have come up with something really, really good, right?

Let’s just say Audrey Hepburn would have walked right off the set of this production. It’s a rare dining experience that makes you long for Burger King. The only thing I can think of is perhaps Wendy’s has a cross-marketing deal with the manufacturer of Tums.

At least according to Kyle, who has had several dozen books read to him and is therefore somewhat of an authority on the matter. Beating out such classics as, “Walter the Farting Dog” and “Belly Button Book” is the well-known tome “Goodnight Moon,” by author Margaret Wise Brown and illustrator Clement Hurd. 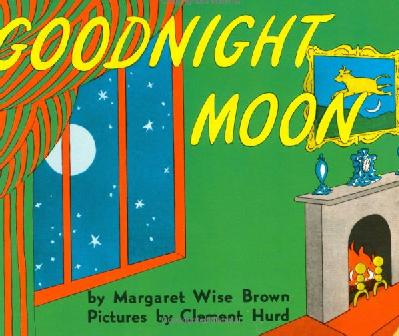 The story follows a simple two-act structure. In the first act, we begin in a mysterious green room. The immediate sense of foreboding is magnified by the disturbing paint color chosen by the owner of this room: an intense forest green that no sane person would ever pick for such a large room.

The mood temporarily lightens as we are introduced to the setting and characters. The main character, a young rabbit, is joined by several familiar characters including the Three Little Bears and the Cow Jumping Over the Moon. The dark mood rapidly returns again as, in a diabolical, Little Red Riding Hood-esque twist, the character known as The Quiet Old Lady is revealed to be a large rabbit dressed in human clothing. One is left wondering what happened to the original resident of the clothing and, given that rabbits are generally considered herbivores, one can only conclude that either this rabbit is of a particularly sinister, meat-consuming variety or it has hidden the body somewhere in the Great Green Room, perhaps under the oversize bed, which is clearly larger than what the smallish young rabbit requires.

The darkness of the first act is quickly dispelled in the lighthearted second act, which consists entirely of the young rabbit wishing every object and character in the book goodnight, including the aforementioned Quiet Old Lady and several new set pieces such as the Stars and Air. This is clearly a thinly-disguised but ultimately vain (and mildly humorous) attempt by the young rabbit at forestalling his bedtime. The reader is left hoping that the Air will not actually be leaving the room after being wished goodnight, although the answer to this question is cunningly left by the authors to the yet-to-be-announced sequel.

Whatever the intent of the author, “Goodnight Moon” is nearly always successful at one thing: bringing on a state of sleepiness in the individual being read to. Although that would usually be considered an undesirable trait in a book, in this case it can be leveraged quite successfully when the book is read at the right time of day, namely bedtime. Having been written in 1947, this book has clearly stood the test of time and will undoubtedly be gracing the shelves of three-year-olds for many years to come.